North American power cords come in all sorts of shapes and sizes. However, the names of the connectors follow a clear structure, making an initial distinction fairly simple.

The connectors have type names that follow a fixed format: ‘NEMA n-mmX’. NEMA stands for National Electrical Manufacturers Association, the organisation responsible for standardisation. The variables in this format express the following:

And then there is the prefix L, which is added for the locking types.

The standard electricity outlet found in almost every household and building in the United States, is NEMA 5–15R. 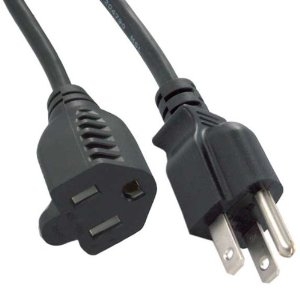 NEMA wiring devices are made in current ratings from 15 to 60 amperes, and voltage ratings from 125 to 600 volts. Different combinations of contact blade widths, shapes, orientation and dimensions give non-interchangeable connectors that are unique to a particular voltage, current capacity, and grounding system.
Click here for an overview.

A summary of a number of different types of power cords:

NEMA-1 plugs are compatible with NEMA-1 receptacles (ungrounded) and NEMA-5 receptacles (grounded). These plugs have two parallel blades. Most plugs are polarized via a taller neutral blade on the plug which fits a wider neutral slot on the receptacle. Ungrounded NEMA-1 outlets can still be found in older constructions, but are not permitted in new building constructions.

The NEMA 5-15 plug is rated 15 A at 125 volts, and has two flat parallel blades like NEMA 1-15, as well as a (longer) ground pin. Both current-carrying blades on grounding plugs are normally narrow, since the ground (earth) pin enforces polarity. NEMA 1-15 plugs are also compatible with NEMA 5-15 sockets. In the US the National Electrical Installation Standards (NECA 130-2010) specifies that the ground hole should be on top. Sideways installation is also permitted.

To our American Power Cords